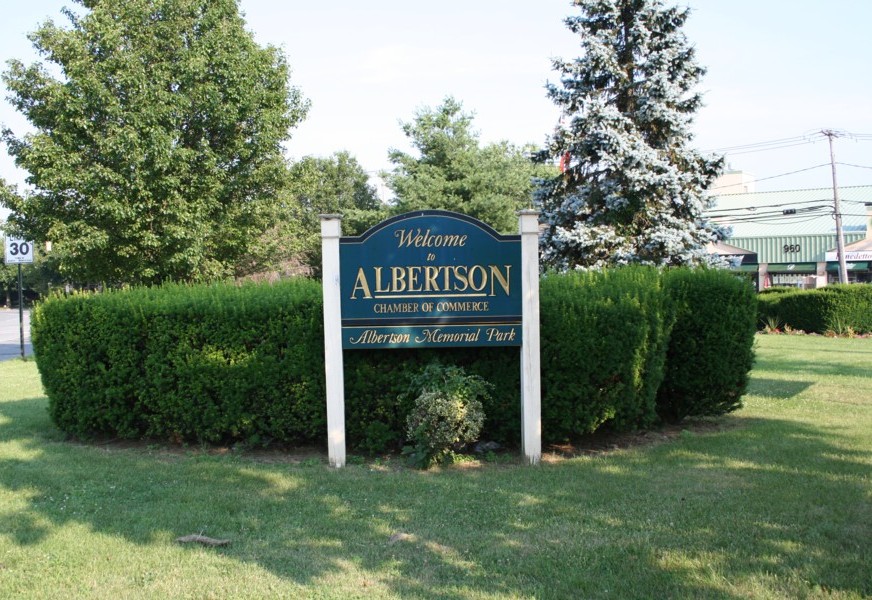 The first European settler was John Seren who came from Connecticut in 1644. Later Townsend Albertson started a farm and gristmill and the community became known as Albertson. In 1850, a road was built through Albertson on the lands of Isaac Underhill Willets. The road is still known as I U Willets Road. (Willets complained that Long Island has more roads than it would ever need). The Long Island Rail Road designated an Albertson train station in 1864. As of the census of 2010, in Albertson there were 5,182 people, 1,812 households, and 1,442 families residing in the CDP. The population density was 7,866.8 per square mile (3,042.0/km²). There were 1,853 housing units at an average density of 2,803.3/sq mi (1,084.0/km²). The racial makeup of the CDP was 70.4% White, 24.3% Asian, 0.3% African American, 0.02% Native American, 1.27% from other races, and 1.83% from two or more races. Hispanic or Latino of any race were 5.50% of the population. There were 1,812 households out of which 33.6% had children under the age of 18 living with them, 67.7% were married couples living together, 8.4% had a female householder with no husband present, and 20.4% were non-families. 17.9% of all households were made up of individuals and 11.3% had someone living alone who was 65 years of age or older. The average household size in Albertson was 2.87 and the average family size was 3.27.

In New York, each city is a highly autonomous incorporated area that, with the exceptions of New York City and Geneva, is contained within one county. Cities in New York are classified by the U.S. Census Bureau as incorporated places. They provide almost all services to their residents and have the highest degree of home rule and taxing jurisdiction over their residents. The main difference between a city and a village is that cities are organized and governed according to their charters, which can differ widely among cities, while most villages are subject to a uniform statewide Village Law (twelve villages still operate under charters issued by the state legislature prior to a revision of the State Constitution in 1874 that forbade chartering villages). Also, villages are part of a town (or towns; some villages cross town borders), with residents who pay taxes to and receive services from the town. Cities are neither part of nor subordinate to towns except for the city of Sherrill, which for some purposes is treated as if it were a village of the town of Vernon. Some cities are completely surrounded by a town, typically of the same name.

There are sixty-two cities in the state. As of 2000, 54.1% of state residents were living in a city; 42.2% were living in New York City; 11.9% were living in one of the other 61 cities. In 1686, the English colonial governor granted the cities of New York and Albany city charters, which were recognized by the first State Constitution in 1777. All other cities have been established by act of the state legislature and have been granted a charter. Cities have been granted the power to revise their charters or adopt new ones. There are no minimum population or area requirements in order to become a city. While there is no defined process for how and when a village becomes a city, the Legislature requires clear evidence, usually in the form of a locally drafted charter, that the community in question seeks to incorporate as a city.